I have been dying to makeover my fireplace because it was just looking old and dated next to my new floors and light gray walls. After lots of Pinteresting, I fell in love with German Smear brick, but I was worried about what that entailed. I decided to combine a few ideas for this easy faux German Smear fireplace makeover, and I absolutely love how it turned out!

* This post may contain affiliate links. If you purchase, I could make a small commission at no charge to you. Please read my Disclaimer and Privacy Policy HERE.

We just refinished our wood floors in a driftwood grayish color, and I just wanted an updated look of my red brick fireplace too. It was just looking old and dated next to my new floors and light gray walls.

I researched online for painted fireplaces and different DIY fireplace makeover ideas. After all my research, it came down to a few that I liked that were painted white, and one that was done with a technique called German Smear.

I ended up using a combination of the two.

German Smear usually uses mortar between the bricks, and then you drag it over the front face of the bricks. Corey was a little nervous about me doing that, so we started with paint instead.

I used the same chalk paint I did for the mirror I had re-done in the hallway. If you missed that, check that blog out here. It’s a mineral chalk paint from Dixie Belle Paint Company, but you can find other chalk paints at any hardware store or Walmart.

The first thing we did was fill in between all of the bricks with paint. Just a large round brush worked great. You’re just covering the dark grout lines with white paint.

It doesn’t matter if it’s clean or messy because you’re gonna be pulling that paint around the edges of your brick.

Once you have the grout filled in with white paint, it’s time to do the face of the bricks.

Here is my little cheat… I didn’t want to use the thin-set mortar, so I thought using a palette knife would give me a really cool effect on the brick and tested a few to make sure.

You guys know I love my palette knife, and it was exactly what I needed for my fireplace! Who would’ve thought!?

I dipped the pallet knife in the white paint, got plenty on the backside, and just scraped it across each brick. You can see me do this in the time-lapse videos below.

There is no special trick to it. You can add as little or as much as you want. I still wanted some of the original brick color to come through, but I wanted white to be the dominant color.

Start with a light coat on all of your bricks, and then decided if you want to go back and make it heavier in some areas. You can keep adding layers.

No brick is going to look the same. That’s what gives it so much character. Depending on how rough your brick is will determine where it picks up the paint when you’re scraping it across.

I tested different pressures when using the palette knife, and I pushed it down hard using a tip to get in some of the smaller crevices if it wasn’t grabbing enough of the white paint.

Just play with it until you like it. These are just a few shots of some of the different brick faces so you can see.

That is pretty much it. It is not a complicated process at all! It’s just a little time-consuming. But, for the drastic change it made to the fireplace and our entire living room, it was so worth it!

I think between Corey and I, it took about eight hours to complete my entire faux german smear fireplace makeover.

The next thing he’s going to do will be to get a solid wood mantlepiece to replace the one we have.

I hope the pictures do it justice, but when you see it in person, it’s absolutely beautiful! I would recommend this to anyone who wants to give their fireplace a facelift. It updated my home a good 20 years!!

When you search German Smear/Schmear or how to paint a fireplace, you are going to come across a lot of the same blogs that I did!

I feel like a lot of them were more complicated than what I was ready for, so I started with the simple version just to see how it did because I knew I could always go back and change it.

After completing it, I would 100% recommend this method because it’s so simple and easy that anyone can do it.

Oh, and I forgot to mention the price! That was the biggest thing for me.

This faux German Smear is the cheapest home renovation I have done in my house for such a significant effect. All I needed was a plastic palette knife, a paintbrush that you won’t mind might be ruined, and chalk paint. That’s it!

I bought a more expensive chalk paint, so I think overall it cost me about $75, but if you went and found a chalk paint at Lowe’s, this painted fireplace makeover could easily cost you under $50!!

Follow The Social Easel HERE so you don’t miss a thing. 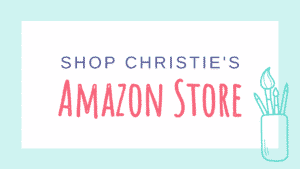